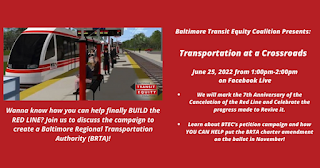 Join the Baltimore Transit Equity Coalition (BTEC) as we mark the 7th Anniversary of the Cancellation of the Red Line 🙁 and share an update on what has happened to help complete the Red Line light rail project through establishing a Baltimore Regional Transportation Authority (BRTA) 😀. This is online this Saturday, June 25th from 1-2 p.m on https://www.facebook.com/moretransitequity/.

The Federal Transit Administration is in the process of conducting a Title VI investigation of the Red Line's 2015 legal cancellation as possibly discrimination against African-American and low income communities. Incidentally, Title VI of the Civil Rights Act of 1964 prohibits the disparate and adverse impacts on African-American and low income communities accompanying the Red Line’s cancellation.

After the 2015 cancellation, the Baltimore Transit Equity Coalition was formed to build a broad political coalition in Baltimore and beyond that will push to reinstate and ultimately construct the Red Line light rail.

Help us bring #MoreTransitEquity to Baltimore by contributing.

If you can’t contribute, we need your help as a volunteer, or to connect us to volunteers and donors. 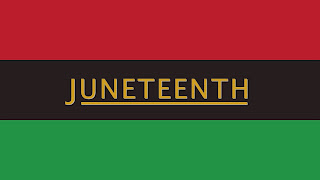 Juneteenth is celebrated on June 19th of every year since 2021. The Federal holiday this year is June 20th.

President Biden signed the holiday into federal law as the the Juneteenth National Independence Day Act on June 17, 2021 - the first new federal holiday since Martin Luther King Jr. Day was added in 1983. In accord with other federal holidays, banks, schools and government companies (like post offices) will be closed. Since Juneteenth falls on a Sunday in 2022, workers in states that recognize the holiday have Monday, June 20, off of work, though some will observed it on Friday the 17th.

Since then, only 24 states, and the District of Columbia, have passed legislation or issued executive orders that provide funding to let state employees observe the day as a paid state holiday, according to the Pew Research Center. They are: Maryland, Colorado, Connecticut, Delaware, Georgia, Idaho, Illinois, Louisiana, Maine, Massachusetts, Michigan, Missouri, Nebraska, New Jersey, New Mexico, New York, Ohio, Oregon, South Dakota, Texas, Utah, Virginia, Washington and West Virginia.According to the New York Times, Appropriately, Texas was the first state in the U.S. to make Juneteenth a paid day off in 1980.

Juneteenth is extremely important because its commemoration marks the legal end of slavery in the U.S. achieved by the Union's victory in the Civil War. Specifically, Juneteenth commemorates when Union General Gordon Granger (and 2,000 troops) arrived in Galveston Bay, Texas, on June 19, 1865, when Granger read a federal order telling the 250,000 enslaved African Americans in Texas that they were legally free by Executive Order after the Civil War had ended. Therefore, General Granger’s announcement put into effect the Emancipation Proclamation, which had been issued more than two years earlier by President Abraham Lincoln, on January 1, 1863. Even though the Emancipation Proclamation was made effective in 1863, it could not be implemented in areas under Confederate control. In the westernmost Confederate state of Texas, enslaved people would not be legally free until Juneteenth.

The 13th Amendment to the U.S. Constitution added the abolishment of slavery to the Constitution was passed by Congress in January 1865, but was not ratified and adopted until December 1865.

Juneteenth has been commemorated by African Americans since the late 1800s. As of today, all 50 states have recognized Juneteenth by enacting some type of celebratory proclamation. The holiday is also called “Juneteenth Independence Day,” “Freedom Day” or “Emancipation Day.”

Some traditional ways to celebrate Juneteenth are rodeos, fishing, barbecuing, baseball, a prayer service, speaker series, reading of the Emancipation Proclamation, and dances. Some practical ways to celebrate in 20922 also include: order food from a Black-owned restaurant; support the Black Lives Matter movement and antiracism work; educate yourself and reflect; spend the day reading about Juneteenth's history; watch the documentary 13th on Netflix or other movies, shows, books and podcasts about real-world, present-day issues; watch online Juneteenth events; put a sign in your front yard; and/or celebrate with a barbecue or family meal.

Regarding Lesbian, Gay, Bisexual, Transgender and Queer (LGBTQ+) Pride Month, Mayor Brandon M. Scott said in his May 31st Newsletter: "With this month also being Pride Month, we also celebrate our LGBTQ+ immigrant communities, who have made countless contributions to our history, whether in Baltimore or beyond. Know someone who deserves to be celebrated this month? Give them a shoutout on social media using the hashtag #BmoreWelcoming and tagging @mimabaltimore."

While celebrating the contributions of LGBTQ leaders, friends and family, it is important to emphasize that there are still many issues in the path to equality. Because Immigrant Heritage Month coincides with Pride Month, the Human Rights Campaign commented:

"Ensuring safe places and supportive environments are especially important for LGBTQ immigrants. According to information provided by ICE in response to a request by Rep. Kathleen Rice (D-N.Y.), LGBTQ immigrants are detained twice as long as other immigrants and also face lengthy stays in solitary confinement despite ICE regulations that stipulate its use as a last resort.

For transgender women, the situation is even more precarious. Trans women were detained on average more than twice the average length of detainment of all immigrants held in ICE custody during fiscal year 2017. Transgender people have also consistently reported harassment, assault and maltreatment from ICE officers due to their transgender status." 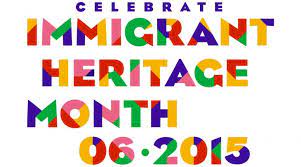 Immigration Heritage Month first began in 2014 with proclamations in many U.S. states. Its purpose is to celebrate immigrants and share inspirational stories of immigration in the U.S. Every year on October 28 is National Immigrants Day. Internationally, the United Nations General Assembly declared 18 December as International Migrants Day in 2000; its 2021 theme was "Harnessing The Potential Of Human Mobility."

According to Mayor Brandon M. Scott's May 31st Newsletter: "June is Immigrant Heritage Month! During the pandemic, our immigrant and refugee communities have played crucial roles in keeping Baltimore safe. Join us on Facebook and Instagram this Immigrant Heritage Month as we highlight some individuals and organizations who have gone the extra mile to keep our communities strong, resilient, and healthy."

Have you visited the Baltimore Immigration Museum? Go! Located at 1308 Beason Street in Locust Point, the Museum features educational exhibits, ancestral research, many personal stories, and much more! You can research your immigrant ancestors with the free genealogical database at FamilySearch. Did you know that the Immigrant House was built in 1904 as a mission house to provide temporary housing to immigrants? Contact the Museum at 443-542-2263, 410-752-0676, or bim@immigrationbaltimore.org.

"The United States is a Nation of immigrants — shaped by the courageous people from around the world who leave their homes, lives, and loved ones to seek refuge and opportunity on our shores.  Their sacrifices and entrepreneurial spirit have contributed to the rich tapestry that has defined the character of our country for generations.  Since our founding, the very idea of America as a Nation of limitless possibilities has been nurtured and advanced by immigrants.  During National Immigrant Heritage Month, we honor the contributions of immigrants to our great Nation and celebrate their profound impact.

Immigrants fuel our economy and work in every profession, including health care, public service, law, education, engineering, construction, caregiving, manufacturing, service, agriculture, and countless other industries.  They create new businesses, small and large, and generate millions of jobs in America.  They are essential workers, providing critical services during COVID-19 and serving on the frontlines of research for vaccines and treatments.  Immigrants have also helped the United States lead the world in science, technology, and innovation while contributing to the arts, culture, and government.  They bring new traditions, customs, and perspectives that keep American innovation dynamic.

My Administration is committed to ensuring that our immigration system is accessible and humane.  I have called on the Congress to pass long-overdue legislation to comprehensively reform our immigration system.  Through multiple Executive Orders, I have also directed agencies across the Federal Government to remove barriers that improperly impede access to immigration benefits and to assure fair and timely adjudication of those benefits.

An important part of our commitment is recognizing that, too often, immigrants face discrimination, xenophobia, and violence.  Hate and fear are being given too much oxygen by those who pretend to love America but do not understand America.  To confront the dangerous ideology of hate requires caring about all people — including our Nation’s immigrants.  After all, the fundamental promise of America is that all of us are created equal and deserve to be treated equally throughout our lives.  As a Nation, we have never fully lived up to that promise, but we have never walked away from it either.  That is why my Administration will continue to use every tool at our disposal to ensure that all immigrants feel safe, valued, and respected.

The United States has long been a refuge for those seeking safe haven.  In the wake of World War II, we opened our doors to hundreds of thousands fleeing the devastation in Europe and the horrors of the Holocaust.  After the Vietnam War and other conflicts in Southeast Asia, we formed the United States Refugee Admissions Program, which has welcomed more than 3 million people fleeing persecution and war since 1980.  More recently, we welcomed tens of thousands of Afghans and their families who served honorably alongside American forces, and we are now welcoming thousands of Ukrainians fleeing Russia’s invasion.  My Administration continues to extend Temporary Protected Status for vulnerable migrant populations throughout the world who cannot safely return to their countries of origin.  Furthermore, my Administration is committed to promoting naturalization and breaking down barriers to United States citizenship for all eligible candidates — a promise that honors our Nation’s values and makes us more secure and prosperous.

When someone becomes a United States citizen, it gives them the opportunity to fully participate in and contribute their unique talents to our American story.  Each generation of immigrants has made our Nation stronger and reaffirmed that diversity is — and always has been — our greatest strength.  This National Immigrant Heritage Month, we honor our immigrants and recommit to remaining a country worthy of their dreams and aspirations, a Nation true to our enduring values, and a democracy that forever stands as a beacon of hope to the world."