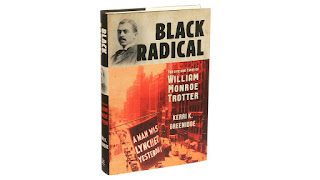 Interesting biography of William Monroe Trotter (1872-1934) who founded the Boston-based black weekly newspaper The Guardian in the first three decades of the 20th century. Instead of the accomodationist racial policies of Booker T. Washington and W. E. B. Du Bois, Trotter advocated a radical vision of black liberation that eventually produced leaders such as Marcus Garvey, Malcolm X, and Martin Luther King Jr. The the first man of color to earn a Phi Beta Kappa key at Harvard University, he also was active in protest movements for civil rights during the 1900s and 1910s. During a 1914 meeting with President Woodrow Wilson, he protested Wilson's introduction of racial segregation into the federal workplace. He joined with W. E. B. Du Bois in founding the Niagara Movement in 1905, a forerunner of the National Association for the Advancement of Colored People (NAACP).

The author teaches in Tufts University’s Consortium of Studies in Race, Colonialism, and Diaspora. She also is director of Tufts' program in American studies and co-director of the African American Trail Project.